Supplier of raw materials for foundry and steel industries

An alloy of iron and silicon with an average of 15 to 90% by weight of silicon. It contains a large proportion of iron silicides.

Production and reaction
Ferrosilicon is produced by reducing silica or coke sand in the presence of iron. Common sources of iron are scrap iron or mill mills. Silicon-containing ferrosilicons up to about 15% are made in blast furnaces coated with acid fire bricks. Ferrosilicons with higher silicon content are made in electric arc furnaces. Common formulations available on the market are ferrosilicons with 15%, 45%, 75% and 90% silicon. The rest is iron and is about 2% composed of other elements such as aluminum and calcium. Large amounts of silica are used to prevent the formation of silicon carbide. Microsilica is a useful by-product.
An inorganic perite is similar to ferrosilicon and its compound is Fe5Si2. In contact with water, ferrosilicon may slowly produce hydrogen. This reaction, which is accelerated in the presence of the base, is used to produce hydrogen. The melting point and density of ferrosilicon depend on the amount of silicon, with two regions almost outside the cavity, one near Fe2Si and the second amplitude of the FeSi2-FeSi3 coating.

Ferrosilicon is used as a source of silicon to reduce metals from their oxides and to deoxidize steel and other iron alloys. This prevents the loss of carbon from the molten steel (so-called heat blockage). Ferromanganese, spiglizene, calcium silicates and many other substances are used for this purpose. [4] It can be used to make other alloy ovens. Ferrosilicon is also used to make silicon, corrosion-resistant and high-temperature silicon iron alloys, and silicon steel for electric motors and transformer cores. Ferrosilicon is used in the manufacture of cast iron to inoculate iron to accelerate graphite. In arc welding, ferrosilicon can be found in some electrode coatings.

Ferrosilicon is the basis for the production of precursors such as magnesium ferrosilicon (MgFeSi), which can be used to produce iron. MgFeSi contains 42.3% magnesium and small amounts of rare earth metals. Ferrosilon is also important as an additive to cast iron to control the initial silicon content.
Ferrosilicon magnesium is effective in the formation of nodules, which is more flexible than iron. Unlike gray cast iron, which forms graphite shells, cast iron contains graphite knots or pores that make cracking more difficult.
Ferroslison is also used in the Pidgeon process to make magnesium from dolomite. Treatment of high silicon ferrosilicon with hydrogen chloride is the basis of industrial synthesis of trichlorosilane.
Ferrosilicon with a ratio of 3 to 3.5% is also used in the manufacture of magnetic circuit sheets for electric transformers.
Hydrogen production
Ferrosilicon is used by the military to rapidly produce hydrogen for balloons by the ferrosilicon method. Sodium hydroxide, ferrosilicon and water are used in the chemical reaction. The generator is small enough to fit in a truck and requires only a small amount of electricity, the materials are non-flammable and do not produce hydrogen until mixed. [5] This method has been used since World War I. Previously, the process and purity of hydrogen production was difficult to control by relying on steam passing through hot iron. [6] While in the "silicon" process, a heavy metal pressure tank is filled with sodium hydroxide and ferrosilicon, and after closing, a controlled amount of water is added. Dissolving the hydroxide heats the mixture to about 200 ° F (93 ° C) and initiates the reaction. Sodium silicate, hydrogen and steam are produced.

Review of alternative goods, competitors and analysis and its effects on product consumption:
There are no specific alloys or substitutes for ferrosilicon, and only some ferroalloys, such as magnesium ferrosilicon (FeSiMg), play a germinating role in the formation of spherical graphite in unbreakable cast irons. 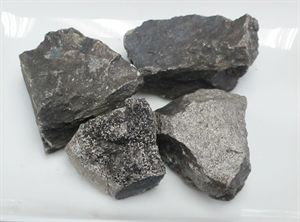